Our 2022 Show Season Kicks Off in Style! 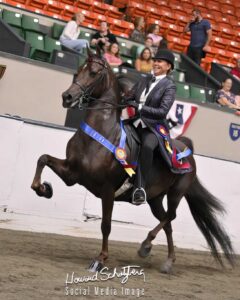 The Greater Boston Charity Show in Springfield, MA marked our opening to the 2022 show season and we took two Kobylar Morgans with us to enjoy our first foray this year.

Stone Pine Charlotte (SpiceOLife Present Tense GCH x TRE My Gift To You) and Liz enjoyed a clean sweep in their Ladies Park Saddle qualifier and then on to the Jr. Exhibitor/Amateur Park Saddle Championship, a thrilling pair of rides to kick off the season.

Nanton’s Revolution GCH (Ultras Special Agent x Abby Lane) not only earned the Reserve Champion honors in Morgan Park Saddle at the Greater Boston Charity, but he also made an appearance in the 40th Anniversary Symphony of Horses a month earlier at the UPHA Chapter 14 Spring Premiere.

On to the Connecticut Morgan Show in Springfield, MA in June, Charlotte duplicated her earlier wins in Ladies and the Amateur/Jr Exhibitor Park Saddle Championship at this competitive show. Next stop — New England Regional! See you all at the historical Northampton Fairgrounds in July!