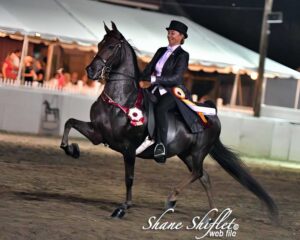 We enjoyed a memorable 2022 show season that kicked off at the Greater Boston Charity in Springfield, Massachusetts, built up at the historic New England Regional in Northampton, kept up the good work at the Connecticut Morgan in Springfield, peaked in Oklahoma City at the Morgan Grand National, then wrapped up in Shipshewana, Indiana with the debut of one of our homebred foals in the inaugural Superior Morgan Sweepstakes event.

Stone Pine Charlotte and Elizabeth topped their Ladies Park Saddle qualifier and went on to win the Amateur/Junior Exhibitor Park Saddle Championship at the Connecticut Morgan with two thrilling and beautiful rides. Charlotte continued her good saddle work at New England with a second in a tough Ladies qualifier, then earning Reserve Champion Amateur Park Saddle honors on the weekend. This beautiful mare by the late World Champion SpiceOLife Present Tense GCH then turned in two brilliant performances in Oklahoma City at the Grand National, with Top Three ribbons in Ladies Park Saddle. 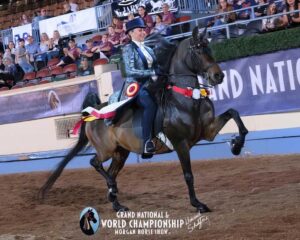 Always an exciting entry and a blast to show, Nanton’s Revolution GCH was a star at Grand National, showing his versatility in saddle and harness with top placings in both divisions. He claimed the Amateur Park Saddle Reserve World Championship with unanimous votes from all three judges, and was also pinned Reserve Grand National Champion in Amateur Park Harness. We love this energizer bunny! 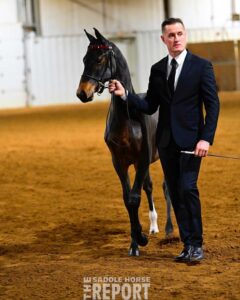 Most exciting for us was making the trip to Shipshewana, Indiana in November to compete in the very first Superior Morgan Sweepstakes with a record setting prize money offering for the top 20 placing weanlings. Our entry, Kobylar Cody No Love (No Contest GCH x MJS Noble Charm) was a trooper, and this wonderful 2022 colt gave us a glimpse into his potential as a performance horse by earning a 13th place finish out of a field of 57 outstanding weanlings! We will have another Superior Sweepstakes eligible foal in 2023 when Dragonsmeade Soliloquy presents her foal by Burkland High Octane. We can’t wait!